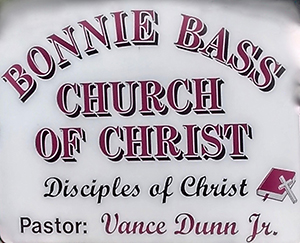 The history of Bonnie Bass Church of Christ (Disciples of Christ) is preserved with faith and hope of inspiring our present and future congregation with God’s direction.  God has protected the ideas and dreams of those who labored and endured many hardships while working in the vineyard. God has been our shield and strength.

Bonnie Bass Church of Christ (Disciples of Christ) was founded in 1963 by Elder Walter Croom. Having a vision from God, he built a small building behind his home on Lake Street in the Judgetown community of Lenoir County. The original name was supposed to be “Barnabas”, after one of the prominent Christian disciples in Jerusalem (see Acts 4:14, 36).  Due to Elder Croom’s speech impediment, the name was documented as Bonnie Bass. The first church was a blessing in the area; most worshipers were able to walk to church. Services were held each second and forth Sunday at eleven am.  Elder Croom pastored until his death in 1973.

Elder Virgil Loftin was a junior minister, so he was installed as Pastor after the death of Elder Croom. Under his leadership the church continued to grow, through hardship and sacrifices. Elder Loftin pastored over a decade at Bonnie Bass. He was also the pastor at another church as well, in his absence Elder Curley Bryant would fill in. Due to his commitment to giving his best, and the strain of two flocks, Elder Loftin resigned to pastor another church in the late 80’s.

Elder Curley Bryant took the oath to feed the sheep and began his ministry. He pastored full time until his health began to decline. At that time he requested the assistance of Elder Vance Dunn Jr., who preached on fourth Sundays. When the flood of 1999 devastated the Judgetown community, Bonnie Bass leaders search for a location to have service. Bishop Richard Artis, Pastor of Mt. Calvary Church of Christ (Disciples of Christ) in Kinston, offered his church to help. Elder Bryant pastored for eighteen years, and then retired due to illness.

As the church began to move forward Elder Vance Dunn Jr. was elected and accepted as pastor in May of 2003. Determined to have a church home, the members worked diligently together. By 2007 Bonnie Church of Christ (Disciples of Christ) had purchased a two room building from Mills Funeral Home, the building was demolished, and rebuilt with the vision that God gave Pastor Vance Dunn Jr. Under Pastor Dunn’s leadership the church was able to purchase a church van, pay the mortgage in full in July 2018, Bonnie Bass Church of Christ (Disciples of Christ) is now having Sunday School 2nd & 4th Sundays at 10am, Tuesday Night Bible Study at 7pm, Noon Day Service each Friday, 8:30 Worship Service each 1st Sunday of the month, annual Building Fund Projects, Family & Friends Day, Youth Ministry, Praise Dance Ministry.

To God Be The Glory